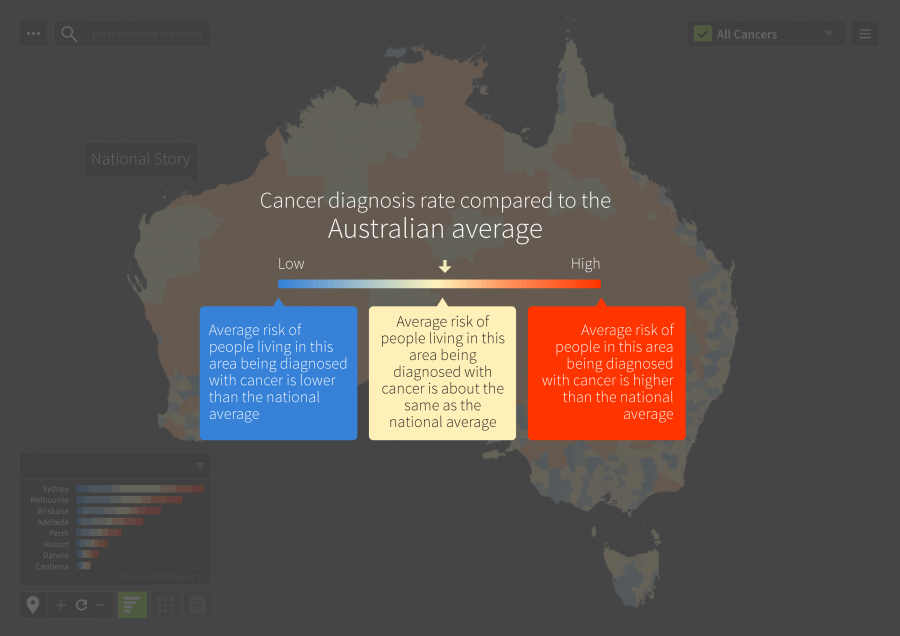 As an online Atlas, it is essential that the visualisations we choose communicate the key messages appropriately. We want our users to interpret what they see correctly.

Developing these visualisation strategies isn’t straightforward. We need to incorporate the uncertainty associated with the spatially smoothed estimates. For example, if people living in an area have a 20 per cent higher risk of being diagnosed with cancer than the national average, is that an important difference? Could it just be explained by random variation? We also need to consider how people understand visual images. For instance, do people prefer pie charts or bar graphs? Which type of graphs do people interpret more accurately? Does this depend on people’s backgrounds and experience? Does it vary according to the information they are seeking? These are only a few of the many questions we have been asking during the design process.

Let’s go to the experts

These concepts require specialist skills, so the Australian Cancer Atlas project has recruited some of the best minds in visualisation techniques to work together to design novel, interactive and informative visual methods to present the data.

First, our team joined with the Visualisation and eResearch (ViseR) team at QUT. ViseR has an impressive portfolio of previous work in this area, including the Virtual Reef and the Cube Globe. The ‘Cube’ was shown to several world leaders during the G20 Summit held in Brisbane in 2014. Within this partnership, we have also joined forces with Thom Saunders, who is a Visualisation Specialist in User Experience and User Interface Design.

Impressive as this expertise is, we wanted to engage with other national experts with experience in visualisation methods. These have included Professor Dianne Cook and her team from Monash University and Dr Sarah Goodwin from RMIT University in Melbourne.

Now, let’s go to the users

While it can be fun generating colourful maps and graphs, it will achieve little unless the key messages are understood by the users, including the public, researchers, health professionals and policy decision makers. After our project team developed and refined initial ideas during many meetings and workshops, we took those ideas to a series of focus groups in Brisbane, Melbourne and Canberra. These focus groups were designed to gain important feedback on whether the participants interpreted the visualisations as we had intended.

The feedback received from these focus groups has since been incorporated into the visualisations shown below. There may be some further refinements to these designs before the final release. Please note that all estimates and numbers shown in this newsletter are fake and are included simply for demonstration purposes.

What are we visualising?

We want to show how the cancer burden varies across Australia depending on where people live. Initially, ‘cancer burden’ will be measured by two separate measures: the average cancer diagnosis rate, and the average five-year excess death rate. The diagnosis rate is the number of cancers diagnosed among people who live in a particular area, divided by the total number of people living in that area. The five-year excess death rate is the proportion of people who die from their cancer within five years of diagnosis. Both estimates are adjusted for age and sex. We intend to add corresponding measures about cancer screening and specific types of treatment in later releases of the Australian Cancer Atlas.

So, let’s really get visual!

We are also working toward including a transparency component to the colours in the maps. This will provide a visual indication of our confidence that the differences between geographic areas depicted in the Atlas are real (no transparency), or likely to be due to chance (highly transparent).

To overcome this, we will provide an inset for the national map (shown on the bottom left) showing the distribution of the cancer burden within the eight capital cities of Australia. The lengths of these bars are proportional to the number of regions within the eight areas. Clicking on any of these bars will then zoom to the relevant area. Corresponding plots will also be provided by State, remoteness categories and categories of socio-economic disadvantage.

In addition to the map, the default screen view provides an inset box on the right containing information about the average numbers of cancers diagnosed in Australia per year, the rate per 100,000 population and the level of evidence that there is a real difference in the diagnostic rate across Australia. The second box (greyed out below) contains the corresponding estimates for excess deaths caused within five years of a cancer diagnosis in the second box. You can also select to view results for males only, females only, or for males and females combined.

The Australian Cancer Atlas will be able to zoom in and out, just like Google Maps.

After zooming in and selecting a specific area on the map, an inset will show where the estimate for that area sits in relation to the estimates for the rest of the country. In this hypothetical example (remember, no real numbers), Badgerys Creek – Greendale, indicated by a small white circle in the first plot below (just above the right side of the text box), is shown to have a diagnostic risk for all cancers combined slightly lower than the Australian average. This is indicated by the yellow/blue colour.

As we noted in our spatial smoothing article, a single number is not enough to understand the cancer burden in an area. As is always the case with statistical estimates, each estimate has a degree of uncertainty, or imprecision, around it. The larger the uncertainty associated with an estimate, the less convincing it is that this is the true value. Conversely, the smaller the uncertainty associated with an estimate, and the further away from the national average it is, the more likely it is to reflect a real difference. Areas with smaller populations are generally more likely to have wider uncertainty around them. The level of uncertainty will be demonstrated in three ways.

Second, what we are currently calling a ‘wave plot’, indicates the level of uncertainty for the specific estimate for Badgerys Creek – Greendale. The small white circle in the centre shows the reported estimate, while the horizontal line shows the range in which we are fairly confident the true estimate lies. The height of the shaded curve, or wave, reflects the probability that the true estimate lies in that range.

Third, as noted above, the transparency of the colours in the maps will show how confident we are that the differences are real differences (no transparency), rather than being due to chance (lots of transparency). This is still under development.

Are these estimates all about me?

Where you live plays only a small role in your cancer risk, there are many other factors that need to be considered when determining your specific risk of being diagnosed with cancer or dying from this cancer, including whether you smoke, how nutritious your diet is and how active you are.

View our latest news articles to find out more information about the Atlas.